SOCON develops customized software for applications dealing with cavern construction and operation. Our programs have user-friendly interfaces and support the user in solving his operational tasks. And if required we modify them even at short notice to suit changing requirements. Many programs for handling internal and external tasks have already been written. A software package for the hard facts.

For instance our CavInfo Software Suite was specially designed for analyzing and displaying individual caverns and entire cavern fields. It contains the four separate programs of CavViewII, CavMap, CavLog and CavWalk, which have been perfectly harmonized to achieve a smooth exchange of data. Whereas using CavViewII the results of sonar cavity surveys from an individual cavern can be displayed and analyzed, CavMap enables several caverns to be displayed and evaluated at the same time as a cavern field. With CavLog all the log data recorded during cavern surveys can be processed. CavWalk Pro in turn allows the user, besides many other options, to create and animate complex 3D models as well as make three-dimensional measurements between caverns. To sum up: This is a complete software package. 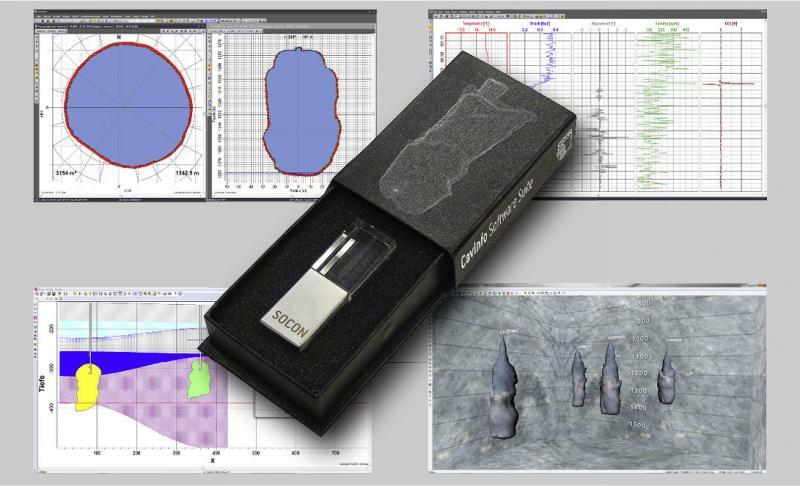 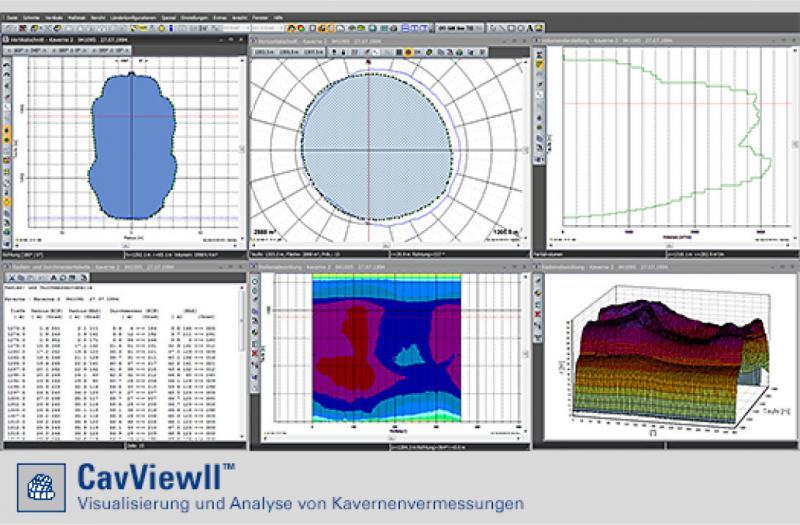 CavView II enables the results of sonar cavern surveys as well as the development of caverns to be displayed in a variety of ways. The integrated display options range from horizontal and vertical sections to graphs of the volume and even to three-dimensional presentations. Functions are also included for comparing surveys, analysing cavern data as well as for data export. 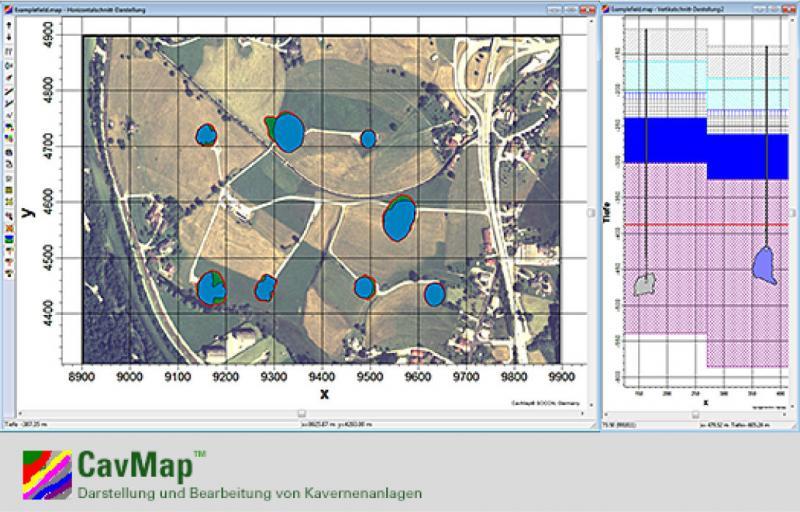 CavMap allows several caverns to be displayed at the same time as a cavern field. Such a cavern field can be viewed in plan, as a section or even from a specific viewpoint. Thus the user can determine individually for each case the most favorable type of display for the caverns or pillars. It is possible not only to determine the distances between adjacent caverns, but also to view specific planes or lines of intersection through a cavern field. Moreover, geological data can be correlated with the geometrical cavern data. CavMap is at the center of the CavInfo Software Suite, because it has been programmed so that it can open directly CavView, CavWalk and CavLog as well as any other application, such as a database or spreadsheet program. Due to the functions specially tailored to cavern fields as well as to its open architecture, CavMap is suitable also as an operations information system.

More information can be found here: 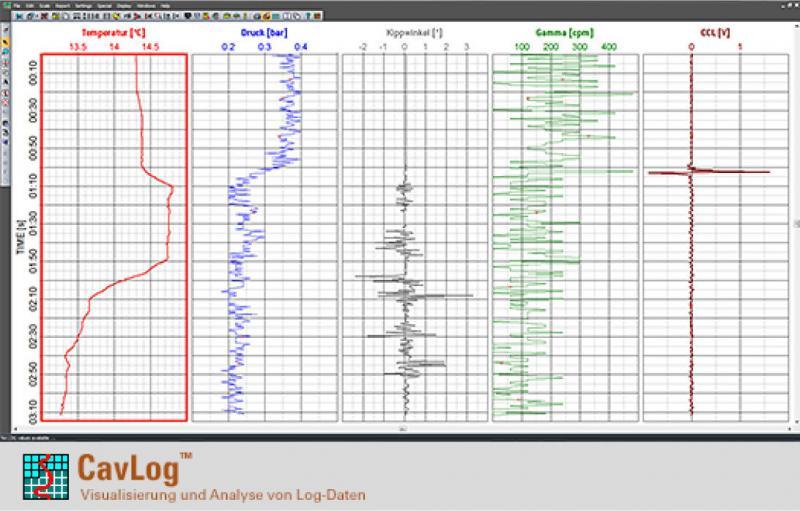 CavLog is used for displaying logs. It provides ways of analyzing in detail individual parameters such as temperature, pressure, dew point, impulse-neutron-gamma, gamma-gamma, and so on. Such data can be tied to appropriate geological information and related to the cavern shape and development. 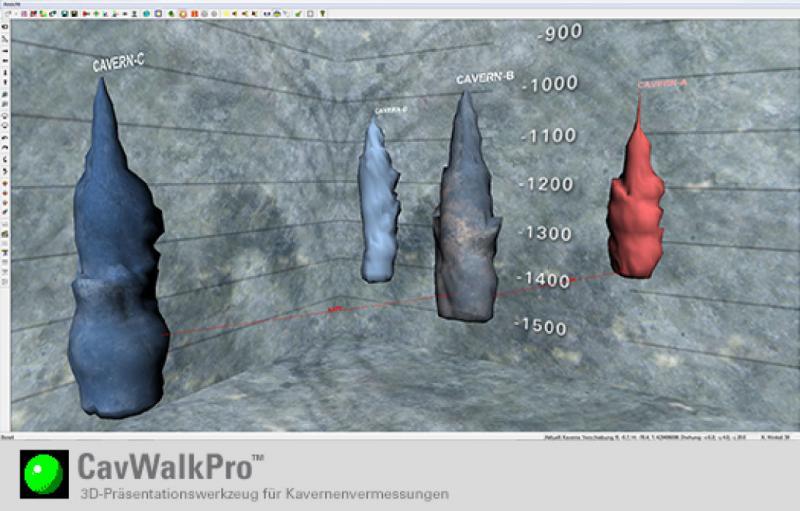 CavWalkPro allows the user to virtually walk through caverns or cavern fields, including the possibility to integrate user-defined 3D models in DXF format (e.g. geological features, overburden layers and formations) from external sources. For viewpoint display, CavWalk has compatibility with market-leading 3D joysticks.
Screen captures as well as animations can be created from the different perspectives. The integrated speech synthesis allows the generation of comments in German and English language. CavWalk Professional is ideally suited for the 3D analysis of cavern surveys.
In the course of further optimizing the visualization options, an interface for transferring the 3D models into virtual reality was created. Using VR goggles and a controller, the observer can now move virtually within the cavern field.

More information can be found here:

The CavBase products are relational database systems developed as classic client-server applications that can be operated via intra- and internet.
These systems can be used to decentrally collect and manage the operating data that accumulates daily at cavern facilities and to perform the necessary calculations and analyses.
The first CavBase database system for the construction and operation of brine production caverns was developed jointly with the company DEEP.KBB GmbH and is called CavBase Production.
The second system, CavBase Gas Storage, has been specially designed for the operation of gas cavern fields and is used, in particular, to perform the thermodynamic calculations required for operational management.
The CavBase database systems are optimized via interfaces for the use of the other CavInfo programs. The appearance and the user interface of the database system are similar to those of the other CavInfo programs.
The software is characterized by very short calculation times.